A no-equipment needed exercise; a meditative ritual; a form of self-care; a method of aligning body, spirit, and mind; a challenge undertaken to develop discipline, a conduit to spiritual growth: the practice of yoga is all this and more. Yet newcomers to yoga can often be overwhelmed by the wide variety of styles that are offered at their gym or in local studios. What do all those Sanskrit words mean? What’s the difference between one kind of yoga and another? Which are beginner-friendly? 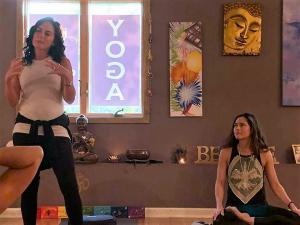 We asked yoga instructor Daniele Jarman of Sarasota to explain the types of yoga that you’re most likely to encounter as someone who is just starting out. This article focuses on five popular styles; next time, we’ll take a look at several more.

Hatha is something of an umbrella term, Danielle Jarman of Sarasota says. It describes any yoga type that teaches physical postures and is therefore somewhat vague. If you attend an Intro to Hatha Yoga class, you can expect a beginner-friendly session that relies on very basic poses. It probably won’t get your heart pumping, but it may challenge your balance, stamina, and flexibility. Hatha yoga practices usually end with savasana, or corpse pose, one of the most restorative and restful poses, and that feeling of relaxation will stay with you for a while. 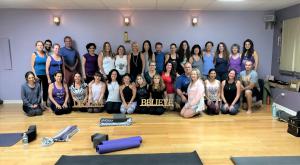 These two styles of yoga are very similar. Both focus on asana, or postures, but in practice they are very different. According to Danielle Jarman of Sarasota, ashtanga refers to the eight limbs of yoga as described in the Yoga Sutras. Considered guidelines for living a meaningful and purposeful life, these eight limbs are:

In Ashtanga, the same traditional sequence of poses is performed in order, with no variance allowed. Daniele Jarman of Sarasota understands from personal experience how demanding a style of yoga it is, both physically and mentally.

Vinyasa relies on some of the same poses, and often is similarly intense, but does not emphasize the strict order in the same way that Ashtanga does. It asks that practitioners link their breath to their movement in a smooth, fluid fashion. Vinyasa teachers often play music in the background, although of course, every teacher is different.

Danielle Jarman tells us that Bikram yoga was developed by a teacher named Bikram Choudhury, who held his classes in rooms heated to 105 degrees and with 40 percent humidity. The sweat that ensues from working one’s way through 26 poses, always in the same order, is intended to be purifying and clarifying. In addition, Bikram classes incorporate two breathing exercises and last for precisely 90 minutes.

Hot yoga is similar but less stringent. The rooms where hot yoga classes are held are usually only between 80 and 100 degrees, with varying humidity levels. Hot yoga teachers lead their students through any sequences or individual poses they wish. Unlike in Bikram classes, it’s usually permissible to interact, talk, and play music during hot yoga.

Join us next time, when Daniele Jarman of Sarasota will guide beginner yogis through an overview of several more popular yoga styles. In the meantime, namaste!